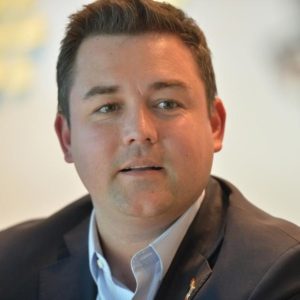 To say that Christian Ziegler lives and breathes GOP politics may be an understatement.

Take the birth of his oldest daughter.

First there’s her name, Reagan, selected in part to honor the president still revered by so many within the GOP.

Then there’s her fan mail, which included a letter from Florida Gov. Rick Scott welcoming her into the world.

Oh, and Reagan’s godfather just happens to be Joe Gruters, one of Ziegler’s closest friends and a man of many political titles, including Sarasota GOP chair and the co-chair of President-elect Donald Trump’s Florida campaign.

Ziegler’s life has been deeply entwined with GOP politics ever since he signed on with Congressman Vern Buchanan’s first campaign a decade ago.

Until recently, though, Ziegler mostly stayed in the background. The 33-year-old Sarasota resident worked outside the spotlight to bolster the GOP locally and statewide. He’s been an insider and a role player in a world where competition for the top jobs can be fierce.

But over the last few years Ziegler has quietly amassed more clout within the state party and worked to become a public advocate for conservative principles, building up to his recent announcement that he will compete to lead the Florida GOP as its next chairman.

In the process he is taking on an incumbent party chairman, Blaise Ingoglia, and stirring up a latent conflict between Ingoglia and Scott that has roiled Florida GOP circles.

Like his friend Gruters, Ziegler also is helping to put Sarasota on the map as a hotbed for ambitious young GOP leaders.

If he succeeds, Ziegler would take over one of the most important political party jobs in the country, leading the GOP in a mega state that can swing presidential elections and often is on the national political radar.

That might seem like a tall task for someone barely 10 years removed from his first foray into politics as a young campaign intern, but Ziegler’s allies say he shouldn’t be underestimated.

Growing up outside Atlanta, Ziegler got an early taste of politics when his mom decided to seek out their local congressman — who just happened to be then U.S. House Speaker Newt Gingrich — and have her son spend a weekend with him.

But even after double majoring in criminology and political science at Florida State University, Ziegler was only vaguely interested in the political arena. He really got the bug after graduation when he went to work on Buchanan’s 2006 campaign.

It was one of the most competitive races in the nation that year, starting with a crowded five-way GOP primary and carrying through to a hotly contested general election that saw Buchanan win by just 369 votes.

“Every day was exciting,” Ziegler said.

His takeaway from the razor thin margin of victory: “You can’t take anything for granted… you have to maximize every minute.”

The value of hard work is something Ziegler saw up close from an early age. After his parents divorced, his mom worked multiple jobs to pay the bills, including at a warehouse, bagging groceries and as an assistant teacher at a Montessori school. She eventually started two Montessori schools of her own, selling them recently and retiring to Longboat Key.

Buchanan said he was impressed from the start by Ziegler’s “energy” and work ethic.

After the election Ziegler went to Washington D.C. as Buchanan’s legislative aide and digital media director. He left the congressman’s office after four years to join a start-up tech firm in Sarasota, but stayed involved in politics.

In 2012 Ziegler was elected GOP state committeeman for Sarasota County, beating out better known candidates, in part, by using his digital savvy to communicate with voters through Facebook ads, email blasts, online videos and other techniques.

The 134 county committeemen and committeewomen help govern the state party and make up the bulk of the votes for party chair. In 2014 they selected Ingoglia over a candidate preferred by Gov. Scott, touching off a rift between the party and the governor that remains wide open.

Scott stopped fundraising for the party after Ingoglia became chair. Republican leaders in the Senate also pulled money out of the party, contributing to a huge dip in the Florida GOP’s available cash heading into the 2016 election compared with 2012.

There was grumbling from some that the lack of fundraising was hurting GOP organizing efforts and could cost the party on Election Day.

Ingoglia did not respond to a request for an interview. But he pointed to the strong year that Republicans had in Florida in a Facebook post announcing his intention to seek reelection, saying “we delivered historic wins.”

Ziegler and his allies argue that the money pumped into Florida by outside forces for the presidential race, combined with Trump’s ability to command media attention and stoke GOP enthusiasm, made 2016 unique. The RPOF will have to stand on its own in the 2018 election, and that means raising a lot of money.

Having Scott more involved with the party would help, said Buchanan.

“You’ve got to have that relationship for the party to run at 100 percent, and I don’t think the party’s living up to its potential because of that,” he said.

Carlos Beruff, a major GOP donor from Manatee County who ran for the U.S. Senate this year, said the party “has been in disarray” under Ingoglia. Beruff is a big Scott supporter but argues it’s just “common sense” that the RPOF chair be in sync with the governor.

“If you’re not on the right side of the guy whose the titular and actual head of the party and that people look up to, then how can you be effective?” he asked.

Ziegler is viewed as a Scott loyalist — the governor appointed his wife to the Sarasota County School Board — and is preaching a message of party unity.

“We have a lot of races coming up, and I definitely think we need our party to be unified — and we’re not unified right now,” he said.

But he’s also careful to stress that the governor did not recruit him for the job and that the party would be “independent” under his leadership.

Whatever rift may exist in the party, Ingoglia has the advantage as an incumbent chairman coming off a winning election year.

But Ziegler believes he has some advantages of his own.

The biggest factor in Ziegler’s favor is the fact that he was unanimously chosen to serve as the chair of the RPOF committee that represents state committeemen and committeewomen, and has strong relationships with many of them. He hopes that will translate into a large block of votes for his chairmanship bid.

Ziegler also is touting the fact that he will be a full-time chairman. He resigned from his start-up job to run for the position. Ingoglia has a home building business and serves as a state representative and chair of the Hernando County GOP.

The Sarasota County GOP’s success is another factor in Ziegler’s favor. Led by Gruters, Ziegler and a handful of others, the local party has gained a reputation for attracting big-name speakers and holding large rallies.

Ziegler could face questions about his youth and the fact that he is relatively untested on the public stage.

But his youth also brings advantages, including a fluency with social media, digital databases and other key components of running modern campaigns. And during the election season he made a point of frequently appearing on local television and in a number of public debates.

At one forum at Sarasota Tiger Bay, he went up against Planned Parenthood of Southwest and Central Florida CEO Barbara Zdravecky. The debate drew a large crowd and Ziegler admits to being a bit apprehensive. But he held his own and left feeling invigorated.

“That was one of the most life-changing experiences for me, was that debate,” he said. “I was nervous but I walked in there and delivered. When I left I felt like I a represented the issues well and that empowered me.”

That debate left Ziegler — who describes himself as a “shameless” and “unapologetic” fiscal and social conservative — eager to continue his public advocacy for conservative principles, which eventually led to his bid for state GOP chair.

“I’m willing to debate anyone, anytime on any issue because I think it’s too important and we need our voice heard.”