In Case You Missed It – I wanted to share this shocking, disgusting and infuriating article (posted below) covering a horrific crime recently committed by two individuals, one of which has been confirmed to be an illegal immigrant under an ICE hold request.
The U.S. House, with the backing of President Trump, recently passed Kate’s Law and legislation to crack down on sanctuary cities. I believe that the House passing these pieces of legislation are great, long overdue steps towards addressing the issue of illegal immigration, but before President Trump can sign them into law, they will need to pass the Senate.
Please make sure to call U.S. Senators Bill Nelson (202-224-5274) and Marco Rubio (202-224-3041) and let them know that you expect them to support Kate’s Law & oppose sanctuary cities.
It’s time to Put America First!
-Christian Ziegler
State Committeeman, Sarasota County
——

According to the police report, the victim arrived home from work with her two children just before 3 a.m. on May 12 and found two armed men inside her house.

The woman told police the two intruders, identified by police as 17-year-old Francisco Palencia and 19-year-old Josue Ramirez, shocked her numerous times with stun guns and pushed her toward the bedroom. She tried to resist them, and walked toward her kids, according to the police report. That’s when one of the attackers threw two pots of boiling water on her. 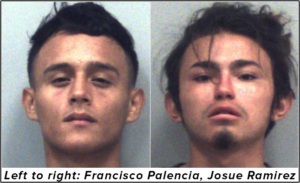 The police report said the other man then pushed the mother into the bedroom, forced her to remove her clothing and raped her. Meanwhile, the suspect who threw the boiling water ransacked the home, according to police.

The woman’s youngest child was in a car seat near the kitchen during the attack, and her other child followed her into the bedroom and witnessed the sexual assault.

The suspects left the home through the front door and the woman called 911, the police report said.

Investigators said the mother suffered burns to her neck, left shoulder and left arm. She was taken to Gwinnett Medical Center in Duluth.

The victim told police her jewelry box and school identification were among the items taken from the home. She also said her German Shepherd puppy is missing. The dog was on the back porch during the attack.

Police arrested Palencia and Ramirez, as well as an unidentified 15-year-old female. They are all facing a number of charges, including rape, aggravated sodomy, kidnapping, home invasion, aggravated battery and cruelty to children.

Palencia was scheduled for a first appearance hearing Thursday morning. Ramirez will appear before a judge Thursday afternoon.

The suspects are being held at the Gwinnett County Jail.